Car buyers purchasing a Chevy Bolt EV/EVU in 2022 will receive a $6,000 rebate from GM/Chevrolet.

The rebate is only available to buyers of a new 2020-2022 Bolt EV/EUV, purchased new from a Chevrolet Dealer. Chevy Bolt EV/EVU buyers accepting the rebate will be required to sign an agreement waiving their rights to sue Chevrolet for any reason.* Since the vehicles are now more affordable, GM/Chevrolet is hopeful this move will bolster the sales of the Bolt EV which has been plagued with issues previously.

In November of 2020, GM first issued a recall for the the earlier models of the Bolt after a few reports of fires. However it took until July of 2021 to announce what was actually causing the problem. Some cells that LG made were diagnosed with two different defects — a torn anode and a folded separator — that, when combined, and allegedly in rare cases, made it possible for a Bolt’s battery pack to catch fire while charging. Some Bolt owners received battery swaps after the recalls, along with diagnostic software to ensure safety. In spite of the replacement, a few battery fires still started in parked vehicles. 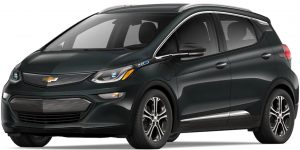